After returning home from a night of heavy drinking, Kobayashi, a plain office worker, awakens the next morning to find an immense dragon outside her apartment door. Transforming into an energetic and cute dragon-girl, Tohru explains that she wishes to accept Kobayashi’s offer to live with her in her apartment and become her maid. Still in a state of confusion and somewhat burdened by guilt, Kobayashi reluctantly allows the dragon to live with her. Though Tohru’s skills as a maid are impressive, her powerful dragon abilities and poor understanding of Kobayashi’s world create some bizarre and alarming scenarios. Kobayashi’s mundane life is further affected by Tohru’s influence with each passing day and the dragon’s presence in her apartment quickly begins attracting more of her kind and other eccentric, supernatural beings.

At face-value, Maid Dragon does little to differentiate itself from other similar shows. It’s a slice-of-life comedy revolving around primarily cute dragon-girls and outside of that sole premise element, there’s nothing distinct to hook the viewer in. Upon closer examination however, the show is brimming with depth, intensely lovable characters, and features a captivating, emotional core. Maid Dragon is as much as it is about being humorous and adorable as it is about investigating a variety of powerful themes such as family, love, and coexistence.

In the typical style of a slice-of-life comedy, Maid Dragon’s most surface-level appeals lie with its characters. Despite the thoughtful and provocative subtext which surrounds several of them, the characters themselves aren’t all that complex. This isn’t to the detriment of the show’s most central characters in Kobayashi, Tohru, and Kanna, however this can often lead to the supporting cast feeling a little one-dimensional in their appeals.

The relationship between Kobayashi and Tohru is a heartwarming and profoundly effective one. At the beginning of the show, Kobayashi presents a remarkably commonplace office worker. She lives alone in her apartment, follows a mundane, unexciting work routine, and spends little time socializing outside of work save for one co-worker who she occasionally drinks with. Perhaps her only noteworthy difference is that, when drunk, she’s prone to blather on about her fascination with maids and the finer points of their attire.

In every way that Kobayashi is utterly normal, Tohru is lively and fantastical. While in her dragon-form, she appears fierce and imposing however her draconic qualities extend to her humanoid-form as well, manifesting through her excited mannerisms and her penchant for casting reality-altering magic at the drop of a hat. Her unbridled personality means that she’s very open with her affection and love for Kobayashi though the latter takes little notice of these advancements. Tohru is fun and boisterous though ultimately she’s a character with a foot in two worlds. In order to live alongside humans, she and other dragons must overcome their stigmatized perception of humanity as lesser, insignificant creatures.

The resulting relationship between these two characters is a charming and surprisingly deep one. Tohru’s open affection contrasts with Kobayashi’s own insecurities and social insensibility. Kobayashi has never been in a situation of being desired or sought after before and the two have to come to terms not only with how they feel about each other but how they articulate these emotions. Kanna’s arrival, the youngest of the dragons, inspires an ongoing family dynamic wherein Kobayashi and Tohru become makeshift, parental figures and are able to explore each other’s significance to a greater extent. This relationship offers true character development for both of them, though it’s exceedingly subtle in its execution. This isn’t about either of them thinking or acting exceptionally different from the way they did before. It’s about being happier – understanding others, their circumstances, and how to express oneself.

One of Maid Dragon’s most ubiquitous ideas stems from the difference in lifespan between Kobayashi and Tohru. Through the juxtaposition of their two contexts, human and dragon, the show explores what it means to live in the moment and love something even though it’s ephemeral. It’s something intrinsic to their two identities and the theme is reflected elsewhere through the perspectives of other characters as well. It’s a touching and emotional undertone which at times rises to the foreground of their friendship in order to affirm Tohru’s conviction or the sincerity of Kobayashi’s soft-spoken fondness.

Just as the dragon’s misunderstandings of human precepts and everyday objects are utilized for the sake of comedy, their foreign perspective also allows them to comment on social conventions. This is where Maid Dragon is able to flesh out some of its broader themes, questioning and scrutinizing things like what it means to be normal, why we treat people differently, and what constitutes a relationship. There’s a surprising rationalization to a lot of the observations made and though each episode is full of cute and comedic moments, rarely does one conclude without touching upon something profoundly endearing or important to the characters. They are the tender moments which best define Maid Dragon’s design and give the show such unexpected heart and sentimentality.

To top everything off, Maid Dragon features some spectacular animation and a wonderfully supportive soundtrack. The body language of its characters goes a long way in conveying each of their personalities and the show makes frequent use of its draconic premise in order to illustrate some infrequent yet stunning action sequences. The show simply looks fantastic and the solid direction all around visually ties together Maid Dragon’s comedic yet endearing atmosphere.

Despite its relatively conventional premise, Maid Dragon turned out to be exceedingly captivating. It’s sentimental throughlines tied each episode together exceptionally well and the cast was remarkably cute and charming. Most of the humor occupied a similar vein and relied heavily upon each character’s most distinctive attributes however if the jokes align with you then they’re pretty consistently enjoyable. There’s some fantastic character chemistry at play in Maid Dragon and each episode grows steadily more adept at drawing out just why that is. 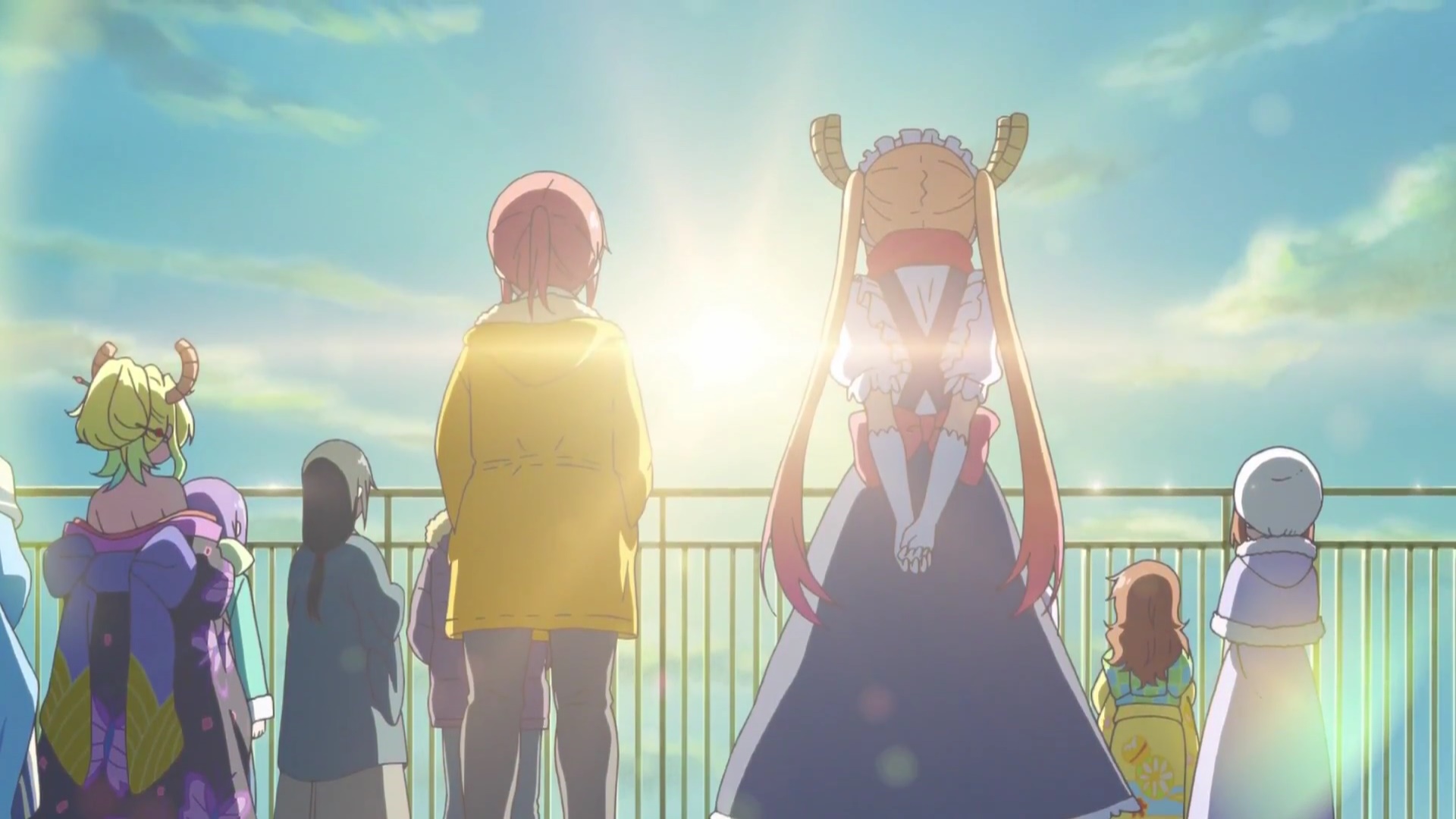