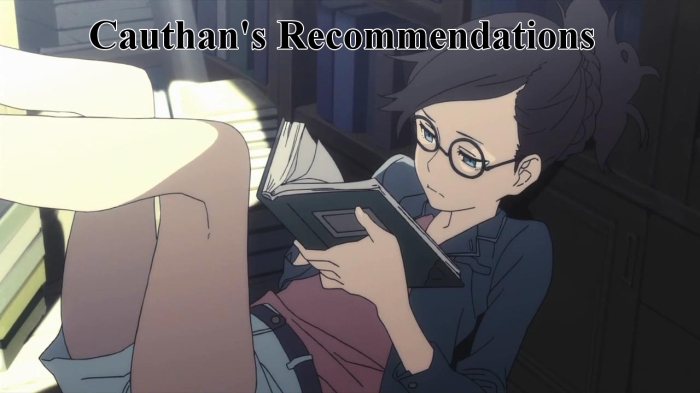 [Description]:  One of the most pervasive genres of anime and full of some of the most recognizable shows in the medium – adventure shows are all about the epic journeys of their protagonists and the experiences they have in fantastic and foreign lands. Often filled with action and world-building, they typically feature grand, expansive narratives and plots to coincide with their sprawling worlds and environments. These are anime that embody the epic feeling of the journey. Their aim is to sweep the viewer away in an immersive expedition alongside the characters themselves. Links to spoiler-free reviews of all of the shows that have them are included.

Details: Moribito details the story of Balsa, a strong, spear-wielding woman, who is tasked with protecting the king’s son after he is accused of harboring a water demon and is sentenced to death. The two travel together and avoid the king’s hunters and assassins as they learn more about each other and the nature of their world. Moribito makes its claim through its realistic depiction of combat and its grounded characters. The action scenes are exciting yet often very practical and well-paced. The world is interesting and features some compelling details however the story is a bit lackluster because of poor pacing and a muddled plot towards the end. Definitely worth checking out if you’re looking for a bit of realism in your adventure and Prince Chagum’s perspective presents a kind of coming-of-age story. You can read a spoiler-free review: here.

Alternative Title: Yona of the Dawn

Details: Similar to Moribito, Yona also features a strong, female protagonist as well as a child of royalty. The story follows Yona’s escape from the palace after her cousin betrayed and killed her father. She flees for her life along with her childhood friend and bodyguard Son Hak and discovers that the Kingdom of Kouka her father presided over is not as picturesque as her privileged life led her to believe. It’s a story about growing out of naiveté, seeing the world, and a young princess journeying to reclaim her throne and the glory of her kingdom. The show has decent action scenes and a surprisingly good adventure story however it is framed within a kind of a sappy, reverse-harem setup. If you don’t mind that most of the people she meets are exceedingly handsome and doting, bishounen men then a moderately compelling story awaits.

Details: Rokka no Yuusha is an interesting adventure show in that it’s just as much a mystery as it is a grandiose, fantasy quest. 1000 years before the start of the story, a demon god appeared and was defeated by the legendary Saint of the Single Flower. Driving the demon into a deep slumber, she foretold of future heroes who would defeat the demon once again upon its awakening. Adlet Mayer, the self-professed strongest man in the world, is chosen as one of these Braves however, upon congregating with the other heroes, discovers that there are 7 of them instead of the 6 foretold. The story quickly transforms from a quest to defeat an ancient evil into an intense and action-packed game of guessing the impostor as well as a locked-room-mystery when the Braves turn on each other. Punctuated by an unpopular ending, the show itself is a good deal of fun and will keep you guessing and reevaluating until the very end. You can read a spoiler-free review: here

Details:  A spin-off story from the Magi series, this show details the heroic adventure of Sinbad in his youth before becoming the man of fame and fortune he is in the anime’s parent story. Sinbad’s journey as he travels from country to country meeting their rulers, capturing powerful, treasure-filled dungeons, and making a name for himself in the world is about as quintessential of an adventure as they come. Anybody looking for an adventure for adventure’s sake would enjoy Sinbad and the various lands he travels to. I highly suggest watching the original Magi series before Sinbad to gain better context and appreciation for Sinbad and the people that accompany him on his journey. While it doesn’t quite live up to its precursor series it’s certainly entertaining.

Details: Given the popularity of shows like Sword Art Online, No Game No Life, and DanMachi the MMO and game genre of anime has received a lot of attention over the recent years but Log Horizon manages to set itself apart. When the players of the popular game Elder Tale are all transported into the world of the game as their avatars they must quickly discern the rules and mechanics of their world in order to maintain order amongst themselves. Log Horizon isn’t so much about escaping the world of the game as much as it is about finding a way to live again inside of it. It’s incredibly creative in how the game’s mechanics and their implications apply to the show’s world-building. It has a famously disappointing second season but it’s certainly an entertaining show regardless. You can read a spoiler-free review of both seasons: here.

Details: With number 6 we move into the only Sci-Fi show on the list. Yamato is about the voyage of the heroic crew of the Spaceship Yamato through the vast reaches of space in order to save planet Earth. They aim to journey to the distant planet of Iscandar whose people offer to restore the polluted and war-ravaged Earth to habitability. In a race against time, the Yamato must overcome their Gamilan foes and complete their voyage before the death of everyone on Earth. Given all of the various planets they visit and obstacles they face, there are few journeys that are as epic as that of the Yamato. It’s a fairly tightly written show and it features some incredible space combat and exploration. It’s ending gets a little bogged down by contrivances but this doesn’t eclipse the show’s fun characters and truly thrilling expedition. You can read a spoiler-free review: here.

Details: Nanatsu no Taizai is about as quintessential as the classic, shounen-action/adventure shows come these days. 10 years before the beginning of the show, a group of legendary knights betrayed their allies in an attempt to overthrow the Kingdom of Liones. Though they were defeated, reports of their survival continue to circulate. After the Holy Knights orchestrate a coup d’état, the third princess of the kingdom Elizabeth seeks out the enigmatic knights in order to take back her kingdom. Full of over-the-top, often creatively choreographed, action, Nanatsu no Taizai exhibits everything that made the action/adventure anime of old great. It doesn’t possess much in the way of subtext or themes but but in regards to its genres its one of the most entertaining shows around.

4. Magi: The Labyrinth of Magic

Details: In the same vein as Taizai, Magi sets itself above and apart from almost all other action/adventure anime through its exceptionally detailed characters, excellent world-building, and rich narrative. Mysterious Dungeons said to house treasure and powerful Djinn capable of granting their conquerors the ability to rule the world populate the land of Magi. Aladdin joins his newfound friend Alibaba in his attempt to capture his first dungeon, setting them both on a the path of a grand adventure spanning countries and kingdoms. Magi’s heavy Arabian influence gives it a distinct visual presentation as well as wonderfully unique subject material. The show’s creative system of magic, incredible second season, and all-star cast of characters makes it an endlessly compelling adventure that is just as fun and boisterous as it is complex and entertaining.

Details: One of the most storied and well-received adventure shows of all time – Hunter x Hunter is an absolute masterpiece of the genre. In this world, Hunters specialize in any number of things from treasure hunting and adventuring to scientific research and nature preservation. Young Gon Freecss wants to become the best of them all in order to find his father who abandoned him. In his pursuit of becoming an official Hunter he meets a variety of companions that join him on his adventure. The show is as fantastic as it is because of its incredibly expansive world, magnificently intricate character-writing, memorable cast, and it’s truly epic narrative. While bright and adventurous at the start, Gon’s journey grows steadily more dark and complicated as the plot unfolds. Though it’s incredible length may seem daunting, it is absolutely worth the watch and investment. Hunter x Hunter is surely one of the most entertaining shows ever made.

Details: Katanagatari tells the story of Shichika Yasuri, wielder of the sword-style without a sword Kyotouryuu where the user uses their own body as a blade. As the son of a war hero, Shichika lives in exile with his sister Nanami until Togame, a determined strategian, journeys to meet him. She recruits him in order to complete her goal of gathering the twelve legendary swords known as the ‘Deviant Blades’ for the sake of the shogunate. Smitten with Togame, he accepts and the two travel across the world in search for the swords and their owners. Set in a stylized Edo-era Japan, Katangatari presents a wonderfully unique art style and cast of characters as well as a truly incredible soundtrack. Thrilling action sequences, a compelling cast of characters, and the relationship of the two main characters makes Katanagatari an immense pleasure to watch.

Details: An anime that really needs no introduction. Fullmetal Alchemist focuses on the journey of two brothers who once attempted the forbidden alchemy of human transmutation in order to bring their mother back to life. Failing to accomplish their goal they paid dearly – Edward with his left leg and his brother Alphonse with his body. Sacrificing his right arm, Edward bound Alphonse’s soul to a suit of armor. Years later, Edward becomes a state alchemist and the brothers embark on a journey to find the mythical Philospher’s Stone and restore their bodies to normal. FMA: Brotherhood offers everything anyone could ask for. An incredible story, an extraordinary cast of characters, an impressive soundtrack, and a detailed, expansive world. The show deserves every bit of its prodigious recognition as well as its title as one of the best anime of all time.