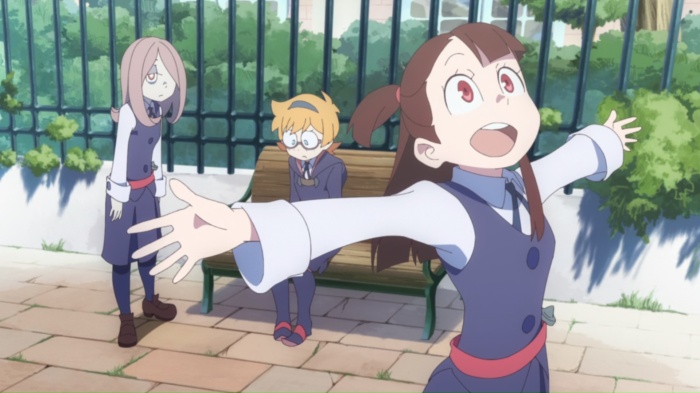 Given its many depictions of magic and adventure, Little Witch Academia is a show best defined by its fantasy and imagination. From its imagery of the prestigious Luna Nova Academy to the gnarled and forbidden Arcturus Forest of the first episode, Little Witch Academia attempts not only to create a world for itself but one that fully embraces the magic and whimsy of its subject matter. Through the characterization of its cast and primarily that of Akko, Little Witch Academia extends this immersive enchantment to its characters by emphasizing their own passion and excitement. It speaks to the show’s underlying energy and nature as a Trigger production but also to something distinctly its own in the way that it distills its fantasy through the elevated affection of its characters.

Akko, who is utterly defined by her passion and all-consuming adoration of Shiny Chariot, is the quintessential example of this approach. She’s impulsive, excitable, and outspoken, but more than anything else – she’s extremely energetic in how she pursues her goals and desires. In this way, Little Witch Academia makes Akko’s energy its own, allowing for her antics and misadventures to set the pace of each episode but also inform the way in which we see the magical world around her. Her enthusiasm stems from her recklessness and naivety but also from her idealistic view of magic itself. Unlike many other students at Luna Nova, Akko loves magic superficially. She has little knowledge of its mechanics and history but her innocent perspective allows for her to love magic in a more complete way nonetheless. It’s then through Akko’s idealistic lens that the world and magic of Little Witch Academia appears all the more grand and shines that much brighter.

It’s the visual and behavioral details that the show attributes to Akko that makes her passion so endearing. When she first arrives at the Leyline Terminal in the first episode, she’s over-encumbered by her luggage and bags in stark juxtaposition to the other witches waiting ahead of her. It’s demonstrative of her eagerness to attend Luna Nova and to finally become a witch but it also speaks to her excessiveness and exaggerated character. Were Akko not constantly reminding both the viewer and her friends of her idolization of Shiny Chariot, her admiration would be apparent all the same. It’s visually exhibited by the posters she hangs on her walls and the way she keeps the Shiny Rod under her mattress when she sleeps.

Given that Akko’s fascination with magic originates with her childhood experience of Shiny Chariot’s performance, it’s the details that distinctly recall that childish enchantment that best portray the kind of passion Akko has carried with her into her later years. Because of this, the trading cards she curates become one of the most quintessential image of her obsession. They exhibit her adolescent wonderment but also the sheer depth of her passion. She didn’t just collect them – she collected every card she could, memorized their text and imagery, and keeps them on-hand even now.

The way  Little Witch Academia plays off of Akko’s passion justifies her exuberance yet allows her room to grow. A lot of the trouble that she gets into and the misfortune that she experiences stems directly from her own reckless enthusiasm and near-idiocy. But it’s that same eagerness and determination that often allows her to persevere in the end and several of the early episodes stress this quality of the story. As best we can tell, it’s because of Akko’s own bottomless confidence in herself and her perception of magic that causes the Shiny Rod to first appear before her as well as the reason she was subsequently able to cast Shiny Arc. It’s precisely because of the way in which she obsessed over her trading cards that she’s able to recognize the papilliodya chrysalises when even Diana could not. She ultimately doesn’t win the broom relay race however her sheer determination and fervor carry her all the way to a second place finish, albeit with a little trickery on the part of Sucy.

Akko enjoys more than her fair share of failures as well and what a lot of the initial episodes amount to is a gradual awakening to the idea that her passion alone won’t bring her the happiness she desires. It’s a disappointing realization yet it contrasts well with her idealistic outlook. In her unwavering belief that she would one day become a great witch, she failed to understand that acknowledgement is something earned through hard work. Akko isn’t special. She doesn’t possess any latent, magical power capable of making her dreams come true like she imagined she might but this understanding doesn’t affect her resolve. She instead redoubles her efforts. Little Witch Academia doesn’t chastise Akko for her passion but encourages it. Her wonderment is an instrumental part of magic itself and though she has a lot of work ahead of her, it’s unmistakably her love and adoration of magic and Shiny Chariot which will ultimately bring her success.

Though Akko is certainly the cornerstone of passion in Little Witch Academia, she’s by no means alone. Lotte is characterized early on through her obsession with Night Fall and its author Annabel Crème. Generally speaking, Lotte is calm, reserved, and shy but she dismisses these characteristics in the face of her own fanaticism. She knows everything there is to know about Night Fall, able to recognize the various cosplays at the release event, answer all of the trivia questions without flaw, and speak endlessly about the series’ various minutiae. When it comes to Night Fall, Lotte practically becomes another person and its because of the depth of her passion that we come to understand her better as a character and what it is she enjoys.

Compared to Akko’s adoration of magic and of Shiny Chariot, Lotte’s enthusiasm is explored in a more niche way however it is still entirely applicable to her character as a whole. Though Akko’s impulsiveness at times evokes Lotte’s concern and frustration, she encourages her friend’s spirited endeavors all the same. She genuinely enjoys supporting others and cheering on their efforts and it’s just as evident in her relationship with Akko as it is in how she renews Annabel’s passion for Night Fall. Though Sucy has yet to receive the same degree of character investigation, her understated glee in regards to poisons and mushrooms is equally demonstrative of her nonchalant personality.

Between the many details that embody its character’s enthusiasm and the use of their affection as a means of characterization, Little Witch Academia’s passion becomes utterly contagious. It’s hard not to love what the characters do with the same fervor and earnestness when their passion is so integral to their personality and presented so ubiquitously. Akko’s wonderment draws out the most fantastic and whimsical elements of her world and it’s through her emotion, that the magical aspects of the show become so thoroughly enchanting.