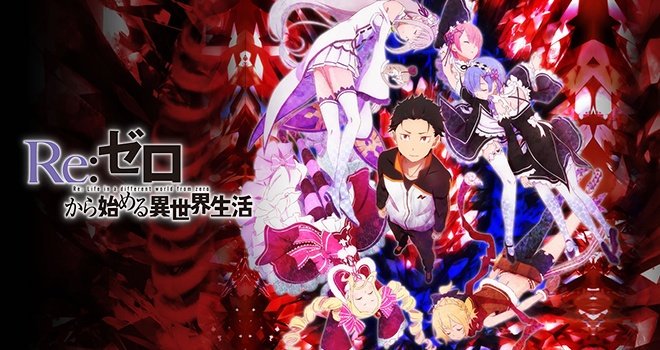 [Synopsis]: Returning from a convenience store late at night, Natsuki Subaru (Kobayashi Yuusuke) blinks to find himself inexplicably standing in the middle of a busy street in a fantasy world. Enthusiastic about this incredible development, Subaru is quickly beaten to a pulp by some back alley thugs before being rescued by a mysterious girl (Takahashi Rie) chasing after a thief and her prized possession. After agreeing to help the girl search for her stolen property and touring around town, Subaru eventually comes to find where the girl’s trinket has been taken however, upon attempting to retrieve it, both of them are assassinated. Suddenly Subaru finds himself standing back in the street where he arrived, discovering that he has gained the ability ‘Return by Death’ allowing him to rewind time by dying and change his and the girl’s ultimate fate.

As opposed to most light-novel-esque, dropped into a fantasy type shows where the story primarily revolves around a relatively identifiable protagonist, the enigmatic and attractive girl he first meets, and a reasonably large cast of purely supporting characters, Re:Zero presents something a bit more complex. Like most of Re:Zero, the setup is remarkably similar however how everything ultimately plays out is fundamentally different. Natsuki Subaru aside, the number of the cast members are fairly one-dimensional but this isn’t necessarily a bad thing. Their personalities and more importantly their dialogues are quite entertaining and add a lot of value and distinction to the show’s large cast despite their straightforward designs.

The character most important to talk about here as he is both absolutely integral to understanding what Re:Zero is about and is one of the most heatedly criticized characters to emerge in the last couple years, is Nastsuki Subaru himself. Unlike the other characters who appeal to their audience through their interactions with Subaru rather than their own personal intricacies, Subaru features a very weighty and meaningful character arc. Upon arriving in the fantasy world, he possesses all the hyper stereotypical traits that one has come to associate with his archetype. He was a shut-in gamer who’s genre savviness leads him to expect certain things from the world and look forward to his own heroic feats and adventures though he is quickly disappointed in this regard. He gives off this kind of reckless, 4th-wall-breaking abandonment in how he addresses other people which in some ways is endearing and provides a good sense of camaraderie between him and the characters he converses with.

With this mindset come a few complications, the most important of which is his blatant white-knight mentality – where someone grounds their self-importance in helping or saving others they deem requiring their aid. It’s a common character trope that is strongly tied to Subaru’s archetypal design as the protagonist however its where the show goes with these initial traits and how it perverts and subverts them that Subaru’s characterization becomes interesting. His personality spurs him to often make shallow, ill-informed decisions and rather then everything falling neatly at his feet despite his inadequacies, he pays for his ignorance and nearsightedness constantly and often in horrific ways.

This drives a lot of people to hate Subaru and subsequently hate the show but his development is approached very purposefully. Re:Zero, for a time, wants you to hate Subaru. It challenges the wish-fulfilling otaku to self-insert with him. The show isn’t afraid to paint Subaru in an unflattering light in order to provide development and commentary and this is a huge part of what sets Subaru apart from other protagonists. What’s more is how his experiences effect him. In a world where he effectively cannot die and the only thing that carries over are his recollections and sensations, the mental stress from the agony of death and of having his memories invalidated places an immense psychological toll on him.

He doesn’t just make poor decisions because of his shoddy ideologies and self-perception but because his priorities and values are warped by his own pain, fear, and trauma. He has to cope with a lot of horrible experiences and these things very clearly influence who he is at each step of his journey. Ultimately one’s own enjoyment of Subaru and probably of Re:Zero itself will depend upon how well they think the show justifies his characterization. He can either be extremely compelling and subversive, or a total turn-off.

While Re:Zero’s visuals aren’t the most crisp at times, it does have plenty of instances of good animation and if anything can be generally agreed upon it’s that the show has an excellent production. The character designs are distinct and memorable and really lend themselves to this fantasy world that Subaru has stumped into. There are a few CG demi-humans that populate the background of the city whenever the characters visit but beyond that the show is pretty aesthetically consistent and looks pretty good all throughout.

What’s impressive is the show’s attention to visual detail, often attempting to trick the viewer, highlight certain elements of a shot, and even unveil a sequence of events in a very cinematic way. While Re:Zero has fewer action scenes than one might expect from its premise and design, when they do roll around they are exciting to watch and at times even possess surprisingly inventive choreography. While the show’s visuals aren’t extravagant, I would cite them as a considerable strength of the show if only because of their intricate focuses and production value.

As evidenced by the premise, the story of Re:Zero starts out very quickly and abruptly – Subaru simply closing his eyes before he is transported to another world. It’s a nice way to skip the pleasantries and dive right into things. We know everything we need to know about Subaru at the time based on his actions in the convenience store and his reaction to arriving in the fantasy world. He starts out his journey in the same way any game-savvy protagonist would. He gathers information, tests certain things like currency and language and wonders where the cute girl is who summoned him before lamenting his own ordinariness and lack of magic abilities. The early episodes are pretty dialogue driven which sets the tone of the show pretty well. Some of the most important aspects of the show are how Subaru forms relationships with other characters and this dialogue-heavy approach both offers compelling character interaction and sets the show up to be something else entirely later.

The setting of the story and the characters that populate it are an additional appeal of the show. The world presents its own lore and landscape which lends to the fantasy elements of the show but also to its foreshadowing and many narrative mysteries. There’s a great deal of world-building minutiae as well which adds a lot to the story though at times can feel too openly expository. Many of the characters as they are introduced are fairly stereotypical to go in-line with the kind of ‘false-premise’ of the show however a number of them develop over the course of the story into more complicated, distinct, and memorable characters. The dialogue in particular is especially engaging.

In much the same way that discussing Subaru is necessary to understand the characters of the show, discussing his ability to reset his experiences after dying is equally essential to understanding the plot of the show. How does Re:Zero make a show interesting when its first episode teaches the viewer that Subaru is only ever one misstep away from starting all over again? How does the show maintain its engaging qualities for long periods of time when the viewer can’t forget that they are only one reset away from all of what’s happened meaning nothing. Within the premise of the story, there are only two things that carry over after Subaru’s death – the knowledge from his experiences and their psychological toll on him. Re:Zero correctly places its emphasis on this.

By establishing early on that the protagonist can die and die repeatedly, ‘Return by death’ becomes an engaging storytelling concept by effectively illustrating that everyone is constantly hovering right above death. Normally the narrative or plot would dictate whether a character lived or died – aptly named plot armor, but the show upends this dynamic by resetting the story in dramatic twists which allows it to do anything it wants with its characters. It’s engaging and a strong use of the show’s premise. When things are at ease, there is an inescapable tension to the proceedings. The viewer is taught to fear for the worst when things look dire but it’s when victory seems assured and everything is going well that the show becomes the most unsettling. That is when you should be most worried. It conditions you to never trust a scene in how it progresses and only those of the greatest importance shine through the misery and gloom.

Though Re:Zero is initially bright and adventurous and returns to that tone with varying frequency, it also becomes grim beyond measure. The schism between what has happened before and what is currently happening in the show creates a discomfort for the viewer which speaks directly to Subaru’s own feelings on a more distant scale. The show really beats Subaru down until a point of absolute misery, despair, and horror which some viewers may view as gratuitous and unwarranted yet it’s certainly grim and thrilling. Between the constant cliff-hanger endings the fear that Subaru might die and all his effort amount to nothing, there is an ominous apprehension to the show. It’s a story about determination, resolve, and development – of how Subaru copes with his self-perception, psychological trauma, and attempts to form relationships with other people, all set against a detailed fantasy world and plot. It sells you a stereotypical, tired, and unapologetically run-of-the-mill setup before gradually transforming into an exciting fantasy thriller that sets itself apart.

The soundtrack was great. Much like some of the show’s visual sequences, the music at times possessed a very cinematic feel to it. The tracks were enjoyable and highly varied. The music really embodied the various tones of the show phenomenally well – the sorrow, the pain, the grand scale of the story, the adventure and drama. Re:Zero had a very effective and memorable sound track that doubtlessly aided in the show’s great presentation of its story.

As a whole, Re:Zero has proved to be one of the most contentious shows of the past several years surrounded by some of the most volatile of opinions. It would seem that one’s enjoyment of it will depend heavily on what the individual viewer brings to the show. Personally I thought that it was an exceedingly enjoyable show that repurpsosed and breathed new life into what has become an incredibly tired and troublesome genre. It managed to incorporate new twisted and provocative elements while not losing sight of what made the style of story it’s playing off of fun and enjoyable in the first place.

I gave Re:Zero an 8 because it was a highly entertaining fantasy thriller with a lot of great dialogue, fun characters, and an engaging world. Subaru’s character arch and the way in which ‘Return by Death’ affected the narrative were both very captivating and the story presented plenty of action and adventure to stay just as exciting as it was dark and grim.

Anybody looking for a solid high-fantasy, dramatic, action thriller ought to find that Re:Zero delivers on all the elements they are looking for in excess. For those who have grown tired of the typical, parallel world story – Re:Zero may offer them some insightful reprieve or double-down on why they dislike the genre in the first place. It’s reception seems extremely case-by-case and so I recommend that any prospective viewers just head right into it and personally see if its the right show for them.